I love beer. It’s not just a cold drink on a hot day; it represents thousands of years of trial and error. It’s a craft. Similar to wine, every beer captures the subtleties of the individual ingredients as well as the container it’s brewed in. Even a slight change in the process or the ingredients will completely change the end result.

I’m also fascinated by beer marketing because, unlike many other products, they have the budget to spend and their marketing needs to position and brand rather than directly sell. That’s a big difference. So when I heard about the Flatlander’s Beer Festival – a local beer-tasting show – I had to go! I picked up tickets for my wife and I. And, in preparation for the event, we printed the list of beers off of the event’s website, crossed off the ones we’d already drank in our travels, and decided what we wanted to drink. We narrowed the list down to ten beers because, well, we’re only human. (Don’t worry, we didn’t drive home).

BEER REVIEW
So, here are the beers we drank (in no specific order). Brewed in British Columbia Canada
The beer was really crisp with a bit of a finish (although not a lot). It smelled like honey. I confess that I drank this beer because it had a cool name.

They have a great website and some interesting names for their other beers – Thirsty Beaver Amber Ale, Beach Blonde Lager, and Cutthroat Pale Ale.
http://treebeer.com 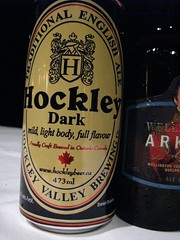 Brewed in Ontario Canada
It was milder than I thought it would be and actually less bland than some of the traditional English ales I’ve actually drank in traditional pubs in England! There were hints of vanilla and my wife said it perfectly: It tasted like it was brewed in wooden barrels.

Their website is defunct (which is not a good sign) but here’s their web address anyway: http://www.hockleybeer.ca/ [Image credit: LexnGer]

Brewed in Oregon USA
This beer had no smell, which I was a little disappointed with. It was heavier through the middle of the taste and reminded me of a less sweet version of Innis and Gunn. There were hints of nutty oak in the aftertaste.

This is another company with some clever beer names and quite a long list of beers. I’d like to try more.
http://www.rogue.com

Fruit/wheat beer brewed in Germany
Okay, so my wife is an unabashed fruity-drink drinker and I wasn’t surprised that this beer caught her eye. But when we drank it, it was like being punched in the face by a grapefruit. It was ALL grapefruit with a hint of beer-like aftertaste. But just a hint. In fact, if I didn’t know that it was beer, I would have guessed it was grapefruit juice. This is easily the fruitiest beer I’ve ever drank.

Schoefferhofer’s site is not in English so I can’t tell you much about them except that they seem to be going for a really fresh, bright, crisp beer-on-a-sunny-beach motif.
http://www.schoefferhofer.de/

Brewed in Australia
I wanted to try a beer from Australia but didn’t have a lot to write about this one. It was crisp (that’s the ale speaking) and sharp (that’s the sparkling part) with a slightly hoppy aftertaste.

Cooper’s website was a little cumbersome to navigate and they seem to have an interesting emphasis on homebrewing, which I thought was weird for a brewing company.
http://www.coopers.com.au Ale brewed in Quebec Canada
I desperately wanted to like this beer but I didn’t. It was really yeasty, apparently because it is partially fermented and then bottled with the intention of continuing to ferment in the bottle.

All of Unibroue’s beers have ties to Quebec legends. Maudite – which means “the damned” – is named after a group of lumberjacks who sell their souls to the devil to spend the winter holidays with their families. So it’s a cautionary tale. Unibroue’s marketing, in my opinion is among the best of Canadian beer.
http://www.unibroue.com

Brewed in British Columbia Canada
I would have skipped this beer. I don’t like porters (which are thick, dark beers) and I don’t like a lot of fruity beers. But this was my wife’s pick and I ended up liking it. Plus it was her favorite of the beers we drank at the event. It was quite nice because it tasted like beer with just a hint of blackberry (unlike the overwhelming grapefruit beer from earlier). It had a bit more of a bitter finish than I prefer but it was pretty good.

Cannery brewing has a pretty weak website, which makes me wonder if they’re either just starting out or not making a lot money right now.
http://www.cannerybrewing.com

Brewed in Iceland
I wanted to try a beer brewed in Iceland so I picked this (but was surprised at the number of Icelandic beers available). If you like stout, you’ll like this beer. It is strong stuff. I needed a seatbelt to drink it and I could barely finish it.
http://www.brugghus.is/english/

Fruit/wheat beer brewed in Belgium
Another of the fruity beers. This one had a strong strawberry smell and taste – which almost made it seem like strawberry juice, but it had a bitter aftertaste, reminding you that you were drinking beer.

No offence to the good people of Fruli but their website is pretty weak.
http://www.fruli.be Brewed in British Columbia Canada
This company has some pretty fun marketing and I wish I had time to sample some of their other beers. This was the last beer of the evening for me and if I could stand and walk in a straight line, I probably would have liked to sample some of their others. This one though, because it was an IPA, was pretty strong. It was hoppy and left a significant aftertaste.
http://www.centralcitybrewing.com