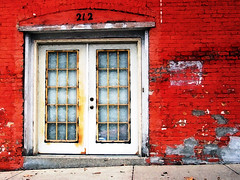 I was working on a project when I heard someone knocking at my front door; I had to run to answer it in order to catch them before they walked away.

Damn. Didn’t recognize him and he was wearing a t-shirt with a logo and holding a clipboard. That could only mean a few things… and since I didn’t see that he was a courier carrying a package with my name on it, the alternatives were not positive.

For the record, I have worked in sales (and I’ve done it all: Phone sales, door-to-door, B2B, you name it) so I’m not about to slam the door in his face. I may not like what he’s selling but I will be respectful.

But he didn’t make the sale. He was fairly good at his pitch but it didn’t work. Here’s why:

I sent him on his way.

HOW TO FIX DOOR TO DOOR
I can’t believe I’m writing this. Okay, so first, avoid door to door sales. It doesn’t respect your customer’s time. It invades the only place in life that they feel safe and in control. It feels pushy.

The problem is: You’re trying to cram your sales funnel into one meeting. Knock knock. Hello? Bam: Lead, Prospect, Customer. It doesn’t work like that. Ease them through the sales process.

If your product or service is more successfully sold through face to face sales (as some products tend to be), don’t make door to door your one single point of contact. Don’t jam your entire sales funnel into one ten minute meeting on their front step.

Create a sales funnel that, if necessary, includes door to door as one part of a larger funnel.

Start by warming up the neighborhood with information. An advertisement in a community newspaper as well as a flier distribution will help to get people thinking about what you’re selling. In your distribution, add the words “One of our service professionals will be in the neighborhood this week. If you have further questions, feel free to ask them.”

Then, send someone with a company logo on the side of a vehicle and a company logo on their clothes. In other words, brand them. Make it seem like they are in the neighborhood anyway. Give them something to give homeowners. While it could be a letter to pop in the mail, it would be more effective if you gave them an attractive package. (Think this sounds expensive? It is… but it also gets more people answering the door and more people opening your literature because people open packages). While at the door, do not sell. Do not pitch. Offer the package, thank them for their time, mention that you were in the neighborhood and only have a brief moment to drop off the information. Of course you should connect who you are with the flier or ad that earlier softened the market. And mention that there is a code inside the package that earns them a free gift.

In the package, make sure that there is a wealth of good information that not only talks about your company but also enables comparison shopping. If you want people to read your stuff in order and not get overwhelmed, put it into a booklet. Give them a website to visit or a phone number to call and a code to find out what their free gift is.

Use the website or phone number to have them set up an appointment.

Follow up your door to door with another advertisement or flier distribution that hits the key points of your pitch.

Here’s why this should work better in most door to door scenarios:

Does the cost scare you off? Test it in a single marketplace. Consider the time you pay a door to door salesperson for and what their door-knocks-to-sale ratio is against the cost of a market-softening flier distribution that can result in faster door knocking (less time at each door) and more closes (because the customer is in control).

If you’re doing door to door sales, stop. It’s a lot of effort for a few, resentful purchases. If you have to do door to door, make it part of a larger sales funnel effort.