Do you hear the beep-beep-beep of a truck backing up? That’s me. 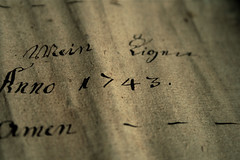 I’ve been writing for years but never had an official business plan. (Gasp). It’s not like I wake up every day and think “what the hell will I do today?”. I DO have plans. But they are mostly back-of-the-envelope plans, back-of-the-napkin plans, palm-of-my-hand plans (a la Sarah Palin), and seat-of-my-pants plans. And most of my business’ success is a direct result of world’s greatest sales funnel plan — a four-step checklist I do every day that has generated enough of an annual wage to keep me from becoming a hobo.

Things have gone very well in my business with this scattered situational plan approach and the advantage is that I can tweak and modify and adjust and rearrange at will.

… and on it went until I was lost in a forest of question marks.

Those question marks multiplied as 2010 arrived and marched on by. I was exploring some joint ventures, I’ve been doing some in-depth studying on different aspects of my business, and I was approached by clients who were outside of the kind of clientele I would normally take on.

I needed to nail down aspects of my business that weren’t nailed down. Not so that I stick with them to the detriment of all else but rather so that I have a framework from which to make better decisions and on which I can build the next phase of my business.

Finally, in a frenzy of tears and swearing (just kidding) I decided to write my damn business plan already. After all, I’d been helping other businesses create their business plans for years. The business plan writing process is certainly not new to me and I have plenty of the legwork done already (like my “cash-machine sales funnel” and Sarah-Palin-inspired palm-written notes).

So it has begun. I’ve set aside time to write one step each week for six weeks (hey, I’ve got to work, too). I’m really looking forward to the process. And shortly you’ll start noticing some of the changes yourself. Don’t worry, nothing ridiculous. I’m not going to change become a network marketer or anything. I think this is more of a refining process; something to create a solid foundation so I can build from here. And once I get into a bit of a groove, I’m going to start sharing some of the business plan best practices that I’m finding helpful as I go.