Admit it: You love the ShamWOW! guy. Everybody does!

But now it’s 2010 and Vince needs a new commercial!

Here are the top 10 products I’d like to see him pitching this year:

10. The Snuggie.
It’s the blanket with arms that makes you look like a background character in a Harry Potter movie. The low-rent actors in the current Snuggie commercial do a terrible job of showing how bad things are for people who don’t have one. (Acting style: Shake head in frustration while trying to cover feet and arms). Vince could do so much better.

9. Magic Bullet.
The people in these commercials make everything with their Magic Bullet. And they look like they’re having a great time, too! Vince should see right away that this is clearly a step up from the Slap Chop. The Slap Chop required so little effort to chop. But the Magic Bullet. Damn. All you need to do is smile and blend and you have a four course meal.

8. A martini set.
Vince seems like a smart guy but when he lists stuff you can put cheese on (at 2:29 of the Slap Chop video) he gets carried away with the rhyming scheme: “Tacos, fettuccine, linguine, martini, bikini”. If Vince invited me over to his house for martinis, it would be pretty weird to begin with but if he were to then add cheese to my martini, I’d have to leave. So, a martini set, sans cheese grater, might be the next thing he should sell… if only to appease the Bartender’s Union. (“Everyone’s ordering cheese in their martinis because of that jerk Vince!”)

7. Anything German.
Vince loves stuff made by the Germans. (Or, at least he says so 24 seconds into the ShamWOW commercial). That means the market is wide open for Vince’s next project: He could sell Volkswagens, a pretzel franchise, knackwurst, Beck’s beer, or lederhosen.

6. Tom Vu’s real estate course.
Remember Tom Vu? He’s the Vietnamese busboy who turned into a gazillionaire and sold real estate seminars during late night infomercials. Vince could breathe some new life back into that pitch! I’m thinking of something like: “It’s Vince here, for Tom Vu’s real estate course. You’ll be saying ‘WOW!’ when you see how rich this guy gets.” Incidentally, there were a lot of bikinis in Tom Vu’s commercials, so Vince might have a use for that cheese grater after all.

5. Anything Ron Popeil has invented.
Ron Popeil has invented just about anything that could ever be invented: Chop-O-Matic, Dial-O-Matic, hair in a can, a smokeless ashtray. The commercials I remember most were for his Solid Flavor Injector, which was basically a syringe that let you jam garlic into a roast. It came with a rotisserie grill and Popeil’s line was “set it and forget it”. Combine that with Vince’s mafia-like “fuhgeddaboutit” and you’ve got a potential hit: “set it and fuhgeddaboutit”.

4. The Tiger Woods “Above Par” Cake Decorating Set.
Tiger needs a new career, fast. I just made up the product’s brand name and arbitrarily chose cake decorating as an opportunity for Tiger to invent something dramatic. Vince and Tiger could pitch it together; I really think I’m onto something there. For Tiger’s sake, we might need to get this one going ASAP.

2. Whatever Billy Mays was selling.
Billy Mays (RIP) was one of several celebrities who died this year. With all due respect to the deceased, he was one of the hardest working celebrities and definitely the loudest. He made a significant career out of pitching products and now those products need another dynamic character. C’mon Vince, OxyClean needs you!

1. Bacon.
Bacon is great. Everyone loves it but no one needs it (kind of like the ShamWOW and the Slap Chop). I can hear Vince right now: “Hey, it’s Vince here, and we’re talking about bacon. You’ll be saying ‘WOW’ whenever you fry up this piece of fat. Not sure what to have it with? fuhgeddaboutit. You can put it on tacos, fettuccine, linguine, martini, bikini. Germans eat bacon, too, so you know it’s good. Hey, are you getting this, camera guy?” 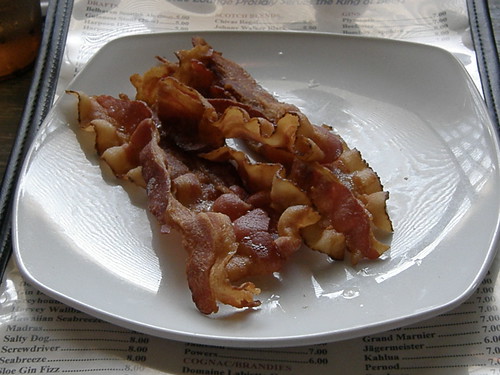