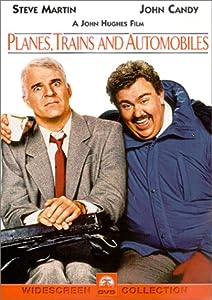 Cover of Planes, Trains and Automobiles

Planes, Trains & Automobiles is a great movie. It is one of the best known Thanksgiving-related movies around (the only one that comes to mind, in fact) and it’s a classic buddy movie. Very quotable (“those aren’t pillows”), very memorable, and it’s a great movie to use in the Six Degrees of Kevin Bacon game (because he has a small role)!

But the movie also teaches us some lessons about business. Actually, there are a surprising number of business lessons we can learn, as well as an unflattering spotlight on several industries. For the sake of time (the turkey needs to go into the oven shortly), I’ll list 3 business lessons:

1. Customer service is far too rare.  Within the first 10 minutes (or so) of the movie, Steve Martin’s character Neal Page gets bumped from first class to coach. When he tries to get back to first class, the flight attendant tells him there’s nothing she can do and that he should have taken it up with the counter agent. Then moments later, she sees a friend and allows the friend to sit anywhere (thus setting up the initial sequence in which Neal Page learns more about John Candy’s character Del Griffith).

2. The law of supply and demand rules. In his racing-for-the-cab scene with Kevin Bacon, Neal Page gets to the cab and has an exchange with another potential cab patron:
Neal Page: Sir? Sir? Could I appeal to your good nature and ask you for your cab?
Cab patron: I don’t have a good nature. Excuse me.
Neal Page: Could I offer you $10? I’ll give you $20.
Cab patron: I’ll take $50.
Neal Page: All right.
Cab patron: Anyone who would pay $50 for a cab would certainly pay $75 .
Neal Page: Not necessarily… All right, $75. [pays] You’re a thief.
Cab patron: Close. I’m an attorney.

And another classic example of supply-and-demand is the famous NSFW car rental scene:

Three business lessons from an entertaining movie. If you have a chance this Thanksgiving, enjoy this classic movie.