Frequently, clients send me press releases that they’ve written but which have been rejected by the press release distribution company. They want to know why their press release was rejected and if there’s anything I can do to “fix” it. Here are the common problems… 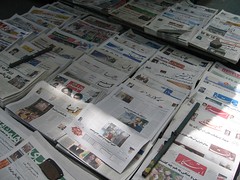 A press release is supposed to be a news announcement. Originally, they were meant to entice reporters to write about the business that submitted the press release. When I was a reporter at a daily newspaper (many years ago!) we’d have reams of press releases roll off our fax machine every day. We’d grab a few, rifle through them, and find something newsworthy to report on.

Thanks to the internet, the potential audience for press releases have grown. They’re no longer strictly for reporters, the “general public” can now read them, too. And there are search engine optimization opportunities to take advantage of. Although the audience has broadened, the concept of “newsworthiness” has not.

Rules of thumb to remember while writing press releases

The following are the key issues that frequently appear in rejected press releases.

A really easy way to review your press release

Pretend you’re a newscaster on the nightly news and you’ve just been handed your press release to read. Words like “I” and “you” don’t make sense in this context and exclamation marks will seem out of place. The newsreporter should report the news. If it sounds too much like a glowing endorsement of your business then the press release should be revised.