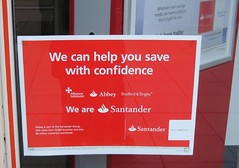 If you can overlook the retina-burning red of their website, and if you can get past their awkward stock symbol (STD), you’ll be surprised to discover Global Santander as an impressive organization and the banking industry’s best kept secret.

So, why haven’t most people heard of them? Well, for one, their focus has not been on US and Canada: They have branches in Europe and Latin America. Latin America has money but doesn’t make economic headlines. (Well, that’s not entirely true: Brazil is the “B” in the BRIC acronym). I’d also suggest that companies that do make headlines lately are ones that are having a rough time in this economy, while a company like Santander has been around for 150 years and just continues to plug away at what it does well.

There’s some interesting potential here for them to grow. In a time when banks are imploding and financial confidence is weakened, a strong company like Santander can come in and make strategic acquisitions. It’s a cheap way to gain fast marketshare. And they already have a North American presence: They’re in Mexico and they have some regional presence in the US with an American bank (Sovereign Bank) and a financial company (formerly Drive Finance now Santander Consumer).

Consumer concerns over “foreign ownership” are a potential threat but they can be addressed with regional, co-branded marketing (on a similar but larger scale to what they are doing at Sovereign Bank and Santander Consumer). Or, they can accomplish it in the same way that the Toyotas and Hondas and Nissans have done it (quite successfully) with heavy investment in communicating that they do business locally.

If I were to recommend how they might gain further entry into the North American market, this would be my recommendation:

ING Direct is another good example of a foreign company doing a good job entering the US & Canadian market. If Santander is looking to make headway into the US/Canadian market, now is the time to do it. They have money, they have sound policies, they have a strong brand, and have little exposure to the mortgage poison that has put many banks on shaky ground.

In terms of the Business Diamond Framework™, all four Function Diamonds are really strong: Their Leadership Diamond has a clear focus and game plan; their Value-Add Diamond has won the trust (and the $1.5 trillion in assets) of Europeans and Latin Americans; their To-Market Diamond articulates clear benefits to their current market; their Support Diamond has made helped them to grow consistently over 150 years. Now, in my opinion, it’s time for them to take it to the next level and become a truly global organization.